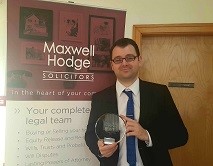 Merseyside and Wirral Solicitors, Maxwell Hodge, nominated Adam French, a trainee Legal Executive at their Maghull branch, for the Workplace Hero category of the St John Ambulance Everyday Heroes Awards after he had successfully performed CPR on a gentleman who had suffered a cardiac arrest whilst visiting their office. The gentleman’s surgeon confirmed that Adam’s fast response had most definitely saved his life and prevented him from suffering brain damage.

Adam reached the final stages of the award process and, on Monday 24th September 2018, had the pleasure of attending the prestigious St John Ambulance Everyday Heroes Awards Evening held at London Bankside Hilton Hotel, where he was presented with his Workplace Hero Award. This event celebrates both organisations and individuals for their contributions to First Aid.

Adam reported “I don’t think I could have ever foreseen that my actions would lead to me to attend such a prestigious event surrounded by some remarkable individuals, celebrities and people who were wearing so many medals that I’m surprised they were able to maintain their balance!”

The event showcased some incredible achievements and really highlighted the importance of First Aid training. Throughout the evening, Adam heard some extraordinary, and sometimes emotional, stories, ranging from a St John Ambulance veteran who helped set up a volunteer First Responder Scheme in his community, to a 15-year-old girl who tended to the victim of a violent crime. Adam was extremely delighted to have been nominated for such an award and said he felt honoured to be included amongst those receiving theirs, although did say he was left feeling unworthy.

Adam reported “It just goes to show how,even a few short moments can have a dramatic life-changing effect”.

The company, which has 8 branches across Merseyside and Wirral offer a wide variety of legal services to clients.