FUNDAMENTAL DISHONESTY – WHAT YOU NEED TO KNOW 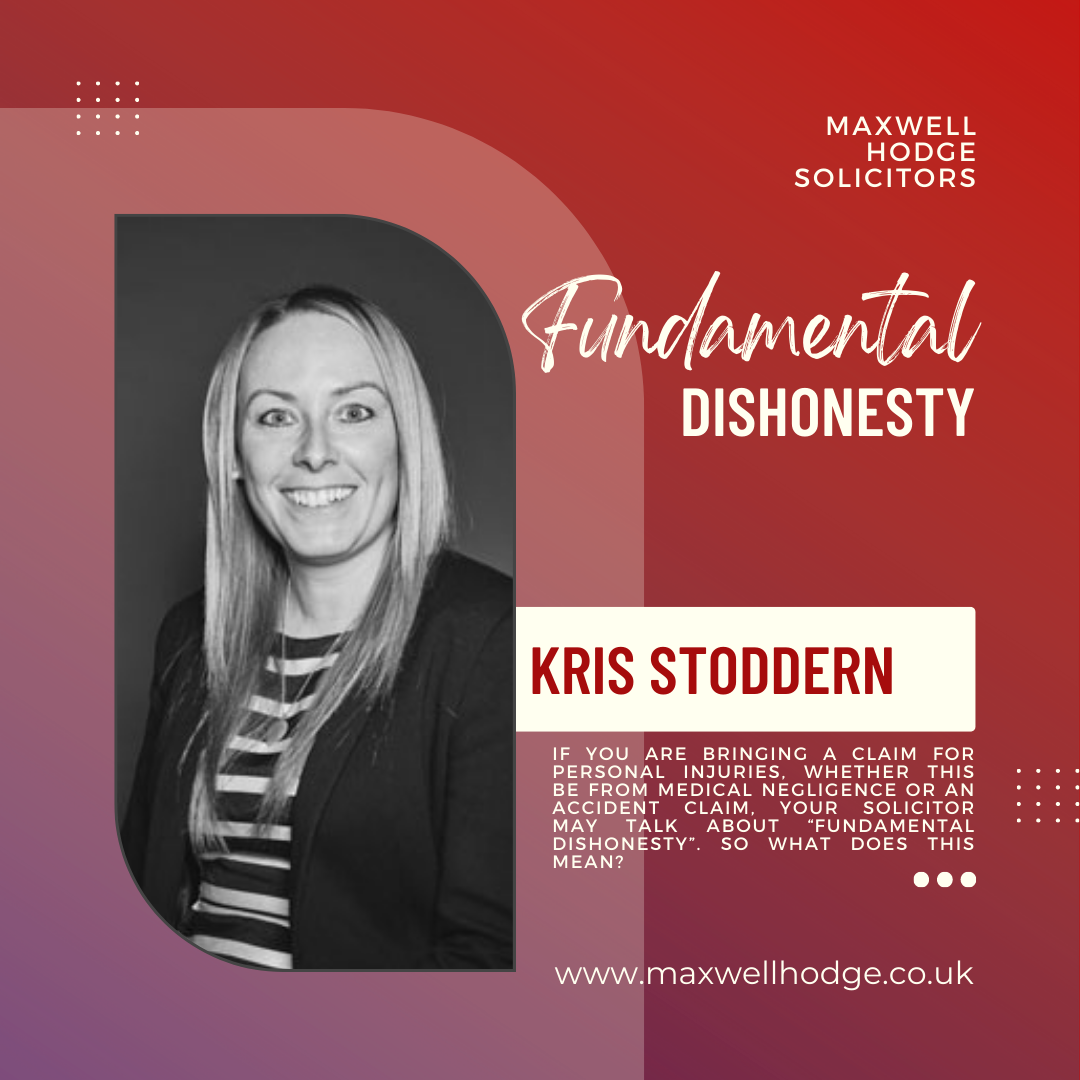 If you are bringing a claim for personal injuries, whether this be from medical negligence or an accident claim, your solicitor may talk about “fundamental dishonesty”. So what does this mean?

The term fundamental dishonesty is referred to in the Criminal Justice & Courts Act 2015 however it is not clearly defined. This means that the Court have some discretion as to the interpretation. Section 57 allows for an entire personal injury claim to be dismissed, including any genuine elements of the claim. This is on the basis that the Claimant had been fundamentally dishonest in relation to the primary claim or a related claim.

Fundamental dishonesty is an argument that is raised by a Defendant in litigation if they suspect a Claimant to have exaggerated their claim in any way, or advanced a claim which is untrue or fraudulent. This may be any element of the claim.

The effect of a finding of fundamental dishonesty is serious and can lead to imprisonment for Contempt of Court. For a finding to be successful, a Defendant does not necessarily have to plead fundamental dishonesty in their Defence as facts may materialise at a later time, or at Trial. However, this will usually be alleged in the Defence, or permission to amend the Defence to include this may be requested.

Examples of fundamental dishonesty include a Claimant signing a statement, confirmed by a statement of truth, which states that they are unable to carry out tasks they could do prior to the accident, which are untrue. This could result in advancing claims which the Claimant is not entitled to, such as care and assistance from family members which is not actually required.

Defendants may carry out investigations such as undertaking surveillance to monitor the Claimant and if any of the statements they have made are thought to be untrue, evidence can be submitted to Court with fundamental dishonesty being alleged. Surveillance will usually be undertaken on larger, more valuable claims, but could be carried out by any Defendant.

A claim can be found to be fundamentally dishonest if the dishonesty goes to the root of either the whole claim or a substantial part of it.

Courts have held that there is a public interest in identifying false claims, and any Claimant who pursues such claims. In claims where fundamental dishonesty is raised, serious consideration should be given to continuing with the claim. There are significant costs risks involved for any Claimant as, if a finding of fundamental dishonesty is made, the Claimant will be ordered to pay the costs of the litigation, which could be substantial. Any findings also carry the option for a judge to impose criminal sanctions against the Claimant, including imprisonment for contempt of court. If a finding is made, the claim (even if genuine) will likely be dismissed resulting in no damages being payable to the Claimant.  Any related insurance policy, could also be withdrawn.

As part of a medical negligence claim, your solicitor will ask you to sign various documents which contain a statement of truth. The statement of truth confirms that any person who signs a statement must hold an honest belief in the contents. Any Claimant who signs a document containing a statement of truth, must read over the same very carefully to ensure that every sentence is true and reflects the evidence accurately. If a Claimant approves a document and signs this knowing the contents to be untrue, they could face an allegation of fundamental dishonesty. This is serious and cannot be taken back. Once the document has been signed and served on the other party (sent to the other party), it is then extremely difficult to provide justification for any untruths.

Sometimes genuine mistakes are made.  However, if an allegation of fundamental dishonesty is put forward, it is often difficult to undo any mistakes and a Claimant may be prevented from taking the matter further.

It is therefore crucial that any documents which are prepared by a solicitor are proof read and approved by the Claimant. This means taking time to read over the document and ensuring it reflects the Claimant’s version of events accurately.